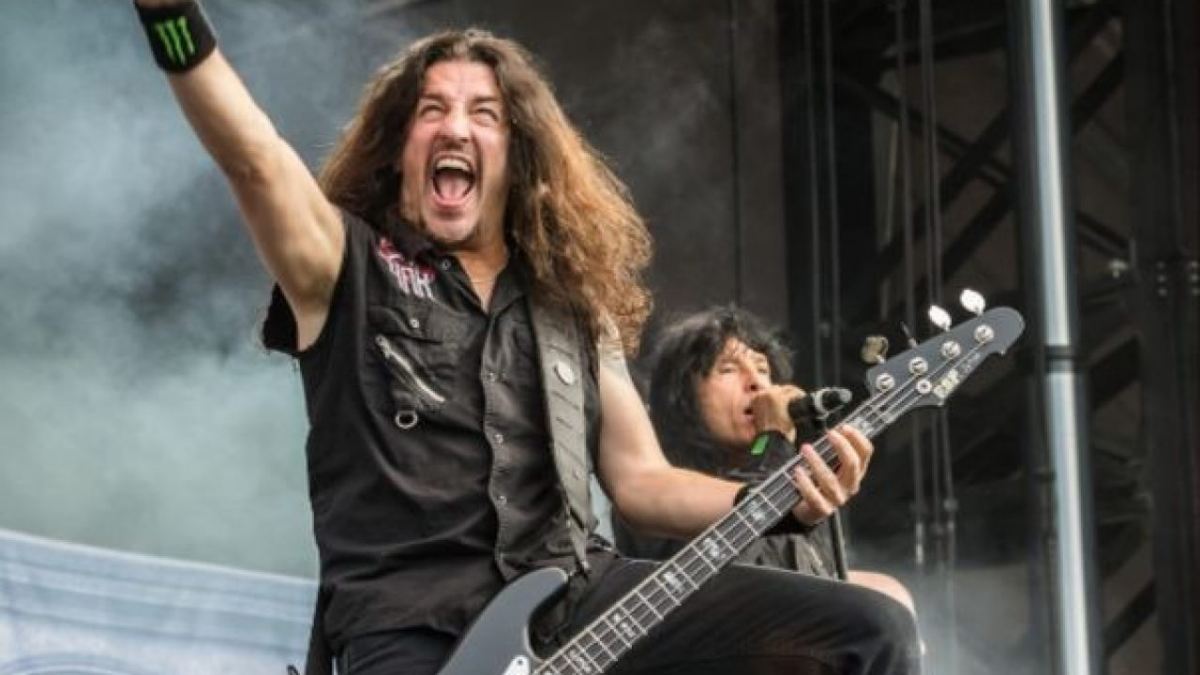 The talented bassist of regarded metal band Anthrax, Frank Bello appeared in an interview recently. During his conversation, Frank Bello looked back at the days he was touring with Pantera, and told how he got infected during those days, and his life got destroyed for a year.

As many of you know, Frank Bello has been promoting his new book, Fathers, Brothers & Sons, for a while. In the meantime, the talented bassist of Anthrax also appeared in an interview recently and talked about the time when he got sick from eating unproperly cooked meat while on tour with Pantera nearly 25 years ago. The talented bassist also reflected how that infection affected his life and destroyed his year during the healing process, as well.

“I had to give up coffee,” started Anthrax bassist Frank Bello. “I had to — because of my gut. And this happened way back when. Years ago, we were on tour with Pantera. We went out and we got loaded one night in Mexico City. On the streets of Mexico City, Pantera and Anthrax, just loaded off our asses… You know those street carts you’re not supposed to eat the fucking food out of? Sausage… Who knows? It was fucking red. I shouldn’t have eaten it. I was starving. I wanted to soak up the juice that was in me, the booze… So this red sausage went into my body. And I was fine for that moment. But then the next day, I started, and it was non-stop — dude, I couldn’t hold anything. For that whole year, every specialist in New York — every specialist — I went to the city and I tried to figure out with everybody, ‘What the hell is wrong with me?’ This one doctor, this one specialist, a renowned dude, finds that I have two — not one — two parasites underneath my liver that were just destroying everything for a year. So this really heavy strong medicine, antibiotic, blah blah blah, got rid of it, but the after-effect of all that good stuff, it really made me not drink coffee — stuff that I love. So I’ve gotta be really careful with my diet,” told Anthrax bassist and continued explaining his following process.

My wife’s a vegan now – my wife’s a full-on vegan. And she’s a great cook, and she cooks me whatever I want, which is awesome. But I kind of follow her path now. That’s what I’m doing because I kind of see what’s going on. And look, I’ll eat but I’ll be really careful about what I’m putting in. The sugar stuff is out of my… I’m out of sugar, man. I’m done with sugar.”

Frank Bello also continued telling that it took a while for the doctors to make the correct diagnosis and catch the disease in time for treatment.

“I went to the most renowned people,” he said. “And I was spending thousands [of dollars] on doctors — thousands — going everywhere in the city. ‘Cause I live in Westchester; there’s not a lot of people up here that you can go to. So I went to New York. And they kept telling me, ‘You have to go to see this guy. You have to go see this girl.’ It was all like that. And finally, I found the right one. And it was not fun, man. That stuff, when you’re searching… I lost all this weight. People were wondering am I dying. What’s going on? And they finally found these two parasites. And it just screwed me up. Now I have to be careful on this specific diet. I can eat but I have to be really careful. Like, sugar is completely out for me, man. Which is probably good for my life anyway. I miss it — I miss a good pastry and stuff like that — but I watch other… I live through other people now,” finished Frank Bello looking back on his past days during the healing process of the infection he got while touring with Pantera. You can also hear the whole conversation of Frank Bello, down below.

On the other side, Anthrax has currently been preparing for the follow-up to 2016’s “For All Kings” album, tentatively due in 2022, while its talented bassist Frank Bello has been promoting his new book, Fathers, Brothers & Sons, for a while, as well.

The talented bassist of Anthrax, Frank Bello also talked about his drinking days with Metallica, as well, while he was also explaining the incident of how they broke into Metallica guitarist Kirk Hammett’s studio during their conversation. You may also want to check what more he told about Metallica and their drunk story, here.