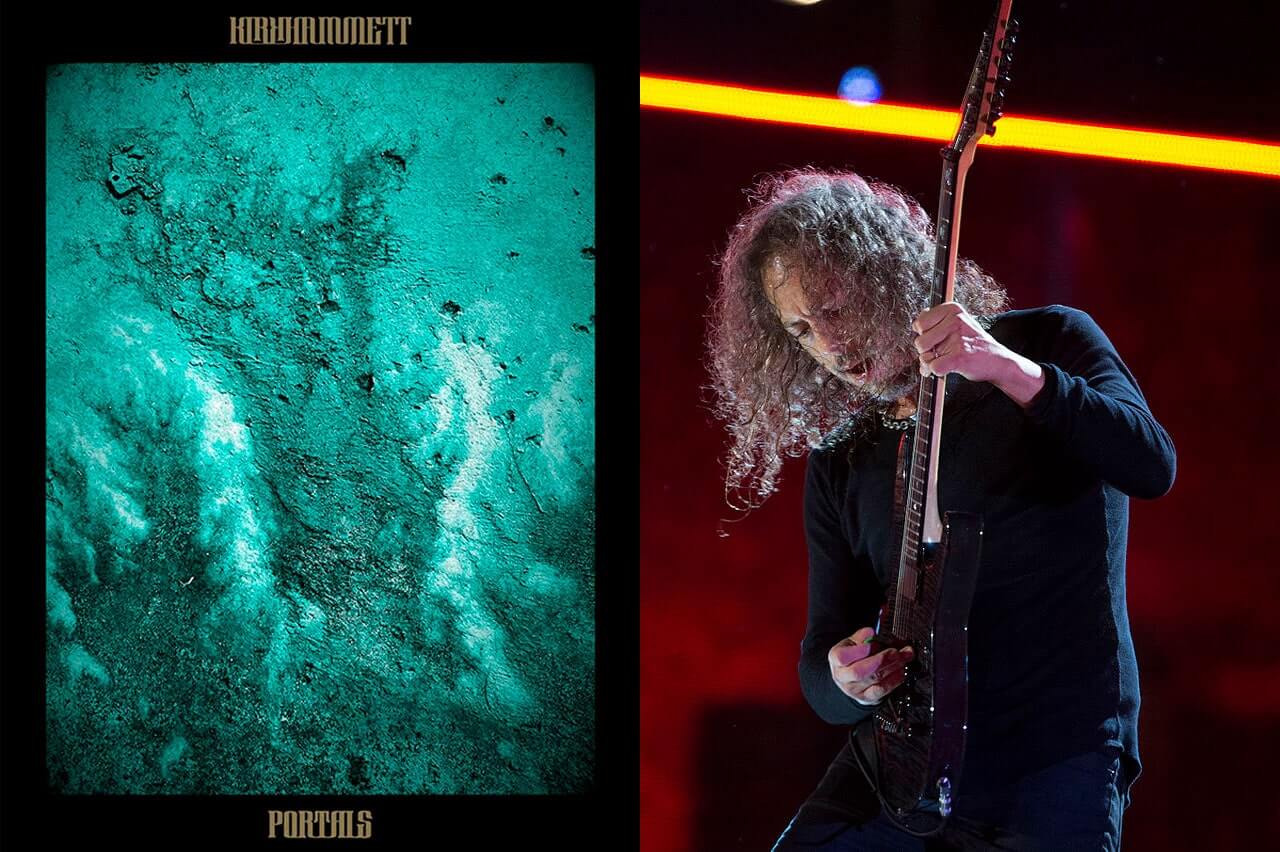 Kirk Hammett talking about his latest solo EP ‘Portals‘ and why Metallica‘s studio album takes so much time. Metallica‘s famous guitarist is very proud of his debut solo release on April 23rd, 2022 with a 27-minute EP called ‘Portals‘ album.

Behind the ‘Portals’ EP album According to Kirk Hammett:

The initial concept for ‘Portals‘ started with that one song. Following that, I realized I could create different soundtrack moments. These songs are what I call Audio Cinematic; I’m creating sounds and pieces of music for the movies playing in my head. Hopefully, they’ll create movies in other people’s heads in a similar fashion. Classical music, Soundtracks, Horror Movies, and perhaps some Ennio Morricone heavily influenced this EP. I wanted it to span the decades and touch upon all the horror I love.

The idea behind the EP was to have all the songs flow into each other and to do this, I basically relied on a whole cast of friends to get this thing done. I had a very clear vision of what everything should sound like. I knew what I wanted in my head. Just had to find the right people to execute it. That’s why I worked with the people I worked with. I essentially called in a bunch of musical favors.

On that note, I always had a strong idea to have classical instruments involved in these sounds because of the soundtrack and classical influences. As fate would have it, when I met Edwin Outwater while working on S&M II, we hit it off right away. He was way into horror movies, and not just in a casual way. He knew his horror movies, and it was obvious to both of us we should work together.”

During a new interview with Goldmine Magazine, Kirk Hammett talked about his latest album, Metallica, and more:

“Yes, basically, I had an exhibition for my horror-movie poster collection happening at the Peabody Museum in 2017, in Salem, Massachusetts. What I wanted to do was spend just, like, an afternoon composing a little background piece of music, something that could play on a loop while people were checking out the collection. So, I sat down and started working on it, and in typical fashion, all of a sudden, it’s five hours later and I’m knee-deep into it, and it has all these other parts and all these other possibilities.

And I’m thinking, yikes, this is turning into something other than I intended it to turn into. So, I just went with it and that became ‘Maiden and the Monster,’ initially. And as I was writing the piece, I thought, oh well, this would be great to incorporate different eras of horror movies somehow, into the music, and so ‘Maiden and the Monster’ is kind of my representation of those early horror movies from the ’20s and ’30s. I really tried to capture the atmosphere of those films, the Gothic feel and the presence of something atmospheric and moody.

Well, it’s interesting you say that. Because I just really got into prog about five years ago. And all these interesting and crazy prog concepts definitely had an influence on me, I have to say. After that I started listening to Yes and Genesis and King Crimson and all different kinds of stuff. Plus, I always had an affinity for bands like The Mars Volta, Dixie Dregs, Return to Forever and Mahavishnu Orchestra, so I was more attuned to the fusion stuff. So, when I heard the prog, it was just like, this is a bridge between those two worlds: jazz fusion and rock or heavy metal.”

Kirk Hammett answered this question: “Why Metallica studio albums take so long between every new record?”

“Yeah, you know, it’s not getting any quicker, too,” answers Hammett, with an audible sigh. “It’s just like, we have a way of working. We have a process that unfortunately takes a long time. It’s just the way we work, the way it is, the way it works as a band. And I’ve grown to accept that. You know, putting out Portals is great for me because it kind of frees me up from that schedule. I can come up with a few tracks, record them and put them out, and I can do it on a completely different time schedule from the band. And that’s great because it doesn’t seem to get in the way of the band’s schedule because, like I say, we move at our own pace.

James [Hetfield] is amazing in that his right-hand technique. You know, it seems like it doesn’t require a lot of maintenance for him to do. He can roll out of bed and play ‘Fight Fire With Fire’ no problem. And that’s great. I play guitar all the time. I’m constantly looking for new things to learn because I’m just curious, you know? [Kirk Hammett] I’m curious about my instrument, curious about music. And curious about being a musical artist. I’m always learning stuff. Plus, I’m always finding out stuff that I learned in the past that I learned wrong, and this is how you should really play it. I’m like, oh, this is great. I finally learned that after 30 years. Which is the case with a lot of Jimi Hendrix stuff. Because Jimi, that stuff is so hard to figure out and so hard to play. A lot of times I’ll come to pieces of his guitar solos, and I’ll just dance through that part because I didn’t know that particular part. Actually, last week I learned a bunch of Hendrix riffs and that helped free me up to fill in some of the holes.”

For almost every new Metallica studio album average fans need to wait at least 6-8 years. You can listen to Kirk Hammett‘s whole ‘Portals‘ EP below!