Life of Agony and Sick of It All

Life of Agony and Sick of It All Tour Dates

Mina Caputo and their alt-metal band will perform their classic 1993 album, River Runs Red, every night. No other opening acts have been announced yet. But the flyer mentions “special guests to be announced,” so keep an eye out for more information.

Life of Agony and Sick of It All concert tour will begin on March 9th in Albany, New York, and also visiting on the East Coast, Midwest, and Canada before ending on April 1st in Stroudsburg, Pennsylvania. You can find the tickets and full concert schedule below!

Life of Agony and Sick of It All 2023 North American tour dates:

Check the tour dates below! 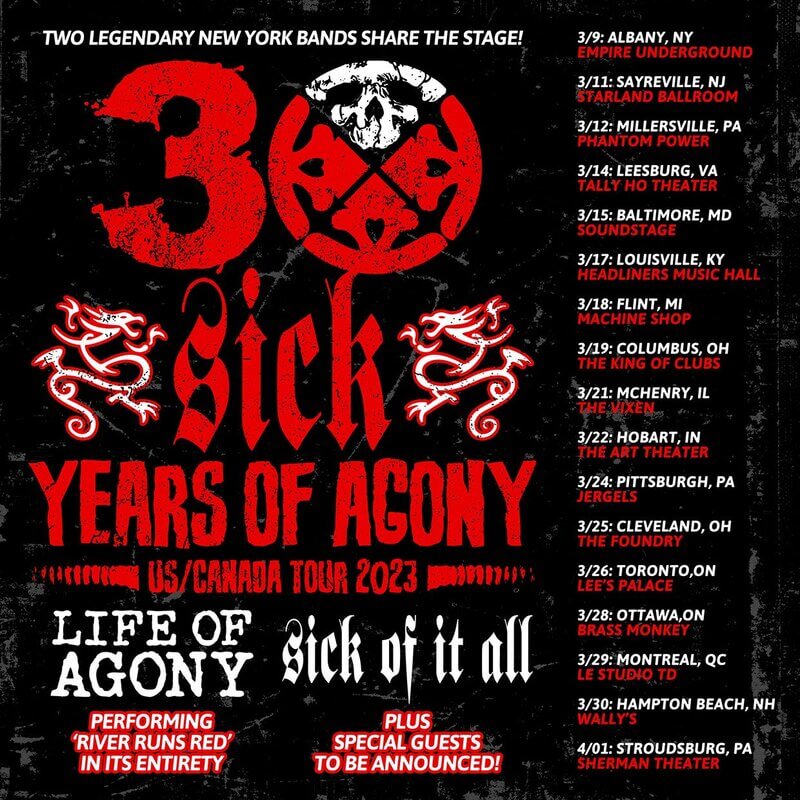 Life of Agony also released The Sound of Scars in 2019. However this tour will mark the 30th anniversary of their debut album, River Runs Red, by performing the record in its entirety. Wake the Sleeping Dragon, Sick of It All’s most recent album, was released in 2018.

Life of Agony’s bassist also talked about their 93 debut album:

“‘River Runs Red’ was an album that helped so many people get through some really dark times. It was raw, heavy and extremely emotional when it dropped back in ’93. We had no idea the impact it would have on that generation, let alone being able to see it have such longevity three decades later.”

Aside from the North American gigs, Life of Agony will go on a winter tour of Europe and the United Kingdom beginning in January. Prong will perform during the European concerts, while Madball will perform at the UK events.

“Wake The Sleeping Dragon!”, the eleventh studio album from Sick of It All, was released in November 2018 through Century Media. Jerry Farley produced the album, which serves as a follow-up to 2014’s “The Last Act of Defiance”, over a two and a half week period at Nova Studios in Staten Island, New York. Tue Madsen mixed and mastered the album, and Ernie Parada created the cover artwork.