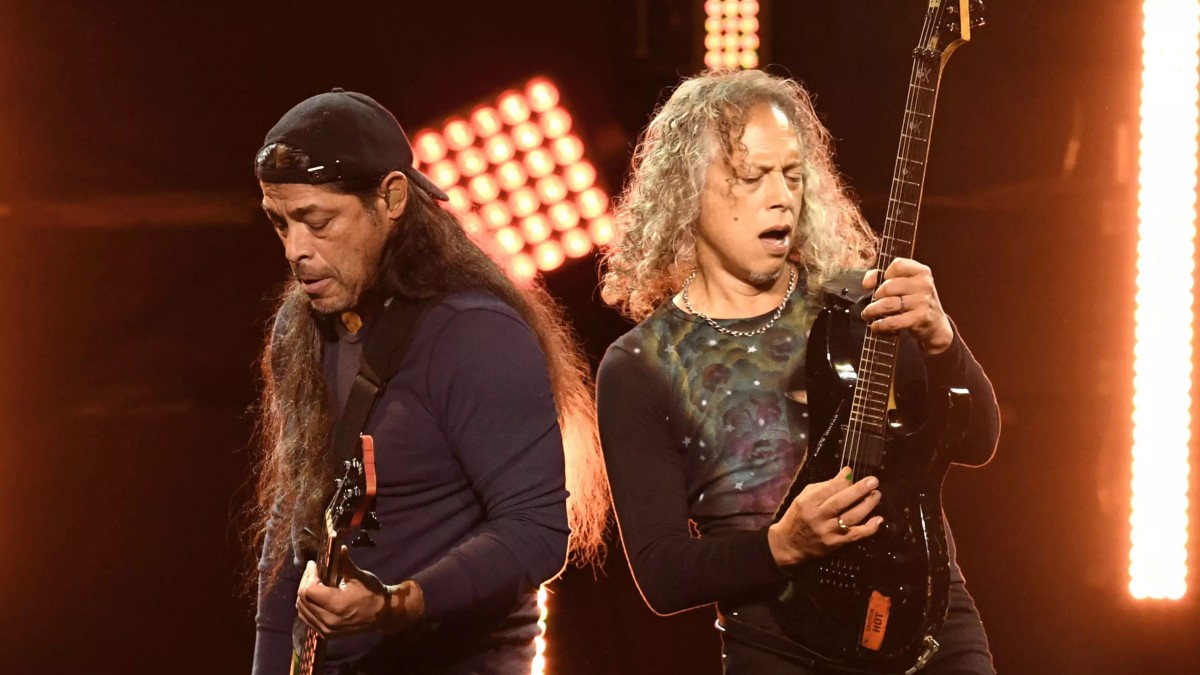 One of the most successful and regarded bands of all time, the bassist of Metallica, Robert Trujillo has recently appeared in an interview. During their conversation, the talented musician has explained how doodles came out, revealing one of his proudest moments with the band, as well.

Mexican-American bassist Robert Trujillo joined Metallica after two years Jason Newsted had left the band, on February 24, 2003. Outside of his tenure with the regarded metal band, Trujillo was also a member of Ozzy Osbourne‘s band for several years, along with having an experimental supergroup, Mass Mental, which he formed with Dub War singer Benji Webbe, in the late 1990s.

Ultimately, as the legendary metal band celebrated its 40th year anniversary, its bassist Robert Trujillo appeared in an interview, revealing his proudest moment in Metallica. He talked about how the unusual effort of Metallica, named Doodle, was added to its shows on the band’s last few tours. Apparently, Trujillo and Kirk Hammett have been covering some songs that are far away from the legendary band’s usual metal sound. The songs are especially pared-down into bass and guitar along with Trujillo’s singing sometimes, as they have been showing up before Trujillo’s solo on Pulling Teeth.

So, the talented musician of Metallica, Robert Trujillo explains and tells more about those doodles during his recent interview. The talented bassist starts by revealing his proudest moment at the band, saying

“Some of my proudest moments were with Kirk on the last European tour, playing in these massive soccer stadiums and playing songs that were sort of native to those cities or even those countries. So we would take a song and learn it from an artist from that country. I’ll just give you one example. In Paris, France, Stade De France, we played a song by an artist known as Johnny Hallyday. Eighty-five thousand people. Nobody knows what we’re gonna play – kind of like street musicians,” explains Trujillo their goals and continues telling one of their stories.

“Lars and James are taking a break. We walk out there. He’s got his guitar; I’ve got my bass. It’s almost like, ‘Where’s the hat?’ Where do they put the money? Literally like that — stripped-down, naked. And we get out there and we start playing a song called ‘Ma Gueule’ by Johnny Hallyday. I’m telling you — people were in shock, but in a good way. And it was tears and smiles, and it made the news. But there was a lot of this that happened through all the different countries and cities throughout Europe where we would choose an artist, cover that artist, and play that song — sometimes two and a half minutes to three minutes. I’m singing in the language, so it gets really challenging. We’re talking about Romania, we’re talking Poland, we’re talking Spain and Portugal and Sweden — I sang in Swedish. That, to me, was one of the highlight moments of my entire existence as a musician, especially in Metallica, because I don’t even know if I could ever do that again. Sometimes I think about it and I go, ‘Man, you were crazy. Kirk and I were crazy.’ That happened just before the pandemic. We were doing that in these football stadiums. Those were called the duets — these were the duets. The duet moments overseas — huge for me personally,” reveals the talented musician Robert Trujillo his proudest moment with Metallica by telling a crazy story of them.

On the other hand, the legendary metal band’s bassist Trujillo had also explained earlier how the idea for the doodle came out, during an interview of his in 2020.

“We were in Europe — this wasn’t the last European tour, but the tour before that. We were in Amsterdam, and we had tried a couple of… There was a duet moment, where we were supposed to play a Metallica song that’s maybe, like, a deep cut, so we’d play ‘I Disappear’ or something, and we started noticing that we weren’t getting the result we wanted. It was, like, we’d go up there and we’d start playing, like, ‘Eye Of The Beholder’ or something, and then the crowd’s expecting James to come out and sing, and it’s, like, ‘Man, this ain’t working.’ They were feeling like it was a prelude moment, and I started thinking, ‘We’ve gotta do something different.’ So Kirk came out this one night, and he started playing that song by CHIC, and it totally caught me off guard. And I’m, like, ‘Oh, damn. Okay, I see where he’s going.’ He’s walking out to the front of the snake pit playing this funk jam. He got me the first night, ’cause I didn’t exactly know the bass line, so I improvised it. And then the second night, I got it,” told Trujillo about how ‘doodles’ have appeared in the first place, and continued,

“So it kind of started there for a split second, though we were still doing the Metallica deep cuts. And then we got to Europe, and we were in Amsterdam, and one of our management team members suggested, ‘Why don’t you play Golden Earring, ‘Radar Love’? Check that out.’ And we were, like, ‘Really?’ So I started playing the bass line, and then the crowd started singing, and it was, like, ‘Hold on a minute. There’s something here.’ So then we started to kind of formulate some local bands from each city. Like, one of the highlight moments was in Prague. We played a country song called Jožin Z Bažin, which was huge. And then we played, in Barcelona, a gypsy kind of flamenco acoustic song, by an artist called Peret — it’s called ‘El Muerto Vivo’, And I’m singing in Spanish, I’m doing my best, and the people went nuts. And we go, ‘Hold on. We’ve got something here.’ So what we ended up doing… We came out of that tour — we scraped through it; it wasn’t perfect, but we scraped through it. And then when we got home, we did some U.S. dates, we did all that, but we knew we were going back to Europe where it really worked. I said, ‘I’m going deep.’ So I did a bunch of research, and I researched every single city, even Estonia, and I found out what cool either punk, alternative, country — it didn’t matter the style — and I learned the fucking language, and I did the phonetic with the lyric, and we went out and did full arrangements. I’m talking about if there was an accordion solo, Kirk was playing it. So we did our homework, and we really, really went into it. I was going to Hawaii to work with him on the arrangements. I spent, like, five days there strictly on the [songs. We weren’t even surfing, we were just ‘boom.’ So we put a lot of hard work in it. I mean, we were surfing a little bit, but that wasn’t the priority. We were actually really spending time on this,” said Robert Trujillo and explained how they started covering local songs during their tours. And then he continued to tell some of their stories,

“So I would say on that last tour run, ’cause we were in these massive stadiums, sold-out shows… And every night was great, but there was a handful of grand slams where people were crying and it was this heavy… Like, you’re paying tribute to somebody in, like, Moscow, who is like the David Bowie of Moscow, and people are just, like, ‘Oh my god.’ They don’t know what they’re gonna get. All of a sudden, we surprise them, and they get what they didn’t expect. Johnny Hallyday in Paris, at Stade De France, [in front of] 85,000 people. So to be up there and to feel that energy and emotionally connect with the crowd on that level was special. But it was such hard work. I don’t know how we pulled it off,” he said and continued to tell more about how he studied his lesson,

I was meeting with people, like, I would even sometimes do it by phone, and I’d be there for two hours getting the language pronunciation right. So it was a lot of work… And sometimes you’ll take some beatings. I remember a couple of the shows when we first started doing it, man — beatings, bro; beatings… I remember, there was a couple of ’em, but there was one… It was in Pennsylvania. It was like college — it was over where Penn State is. And holy cow, man. I thought we would play like the fight song for Penn State. Man, we got, like, 10 seconds into that thing, and nobody cared. It was, like, ‘Oh my god.’ And I stopped playing — I literally stopped playing. I was so embarrassed. And Kirk kept playing. And then, luckily, we kind of went into a Metallica. Like, in the U.S., we would parlay it with a local song — these are U.S songs — and then we would always kind of justify it by going into a Metallica, like ‘Dyers Eve’ or something. Just like, ‘Okay, we screwed that up, but we got this.’ So it was kind of our savior in the States.”

Also, the guitarist of Metallica, Kirk Hammett told about his live doodles with Robert Trujillo, during an interview of his in 2019, and said,

“We never really know what the response is going to be. You have to understand, we’re going into a country; we’re picking some song that’s seemingly random and abstract to us, and we’re learning this song that we’ve never heard before from this artist that we’ve never heard before, and we’re taking a chance and playing it in a stadium in front of 60,000 people, and we’re hoping that we make the right choice. The last, I would say, three legs of the tour, we’ve been hitting it out of the park, but before that, there were some growing pains. There have been a few times we’ve picked the wrong song and played it and people go, ‘Huh?’ We’ll go into a place like Indianapolis, and we’ll play a song by an obscure punk band called The Zero Boys, because we think they’re cool… We played the hell out of it, and it was really cool, but we looked out at the audience, and they were just like, ‘Huh?’ Rob and I always tell each other and people don’t recognize it, it’s not the end of the world as long as we play it well, and they’re entertaining in the way we play it, so we have that to fall back on… We were in Nashville, and we played a Loretta Lynn song… The next day, we got a message from Loretta Lynn, who said she was actually at the show with her family and was so tickled when we broke into her song. She said she might think about covering one of our songs sometimes, but in the meantime, we should do more of her songs,” told Hammett about the doodles of Metallica he has been doing with Robert Trujillo, as they impressed and gained their fans’ hearts all around the world again.

Finally, as the legendary and widely regarded band, Metallica, and its members’ achievements keep still growing today, you may also want to find out their net worth in 2021, as well.