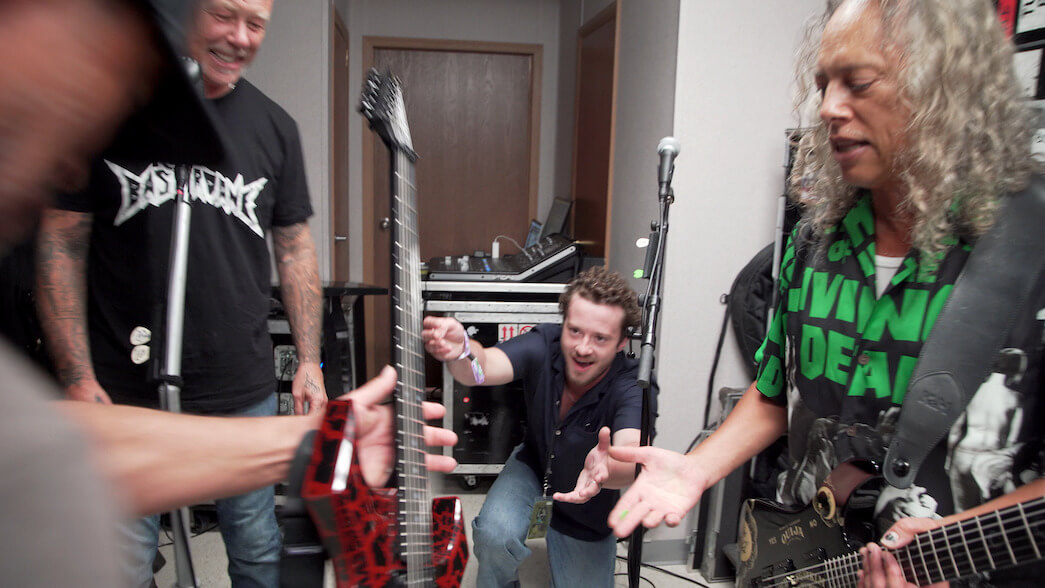 Metallica and Netflix sci-fi series Stranger Things collaborate for the merch. In season 4 of Stranger Things, Joe Quinn turned the world Upside Down after he heroically shredded and played Metallica’s song “Master of Puppets” as Eddie Munson’s character.

Eddie Munson is the head for Munson is the leader of The Hellfire Club. This is a Dungeons and Dragons group at Hawkins High School that comprises Mike Wheeler (Finn Wolfhard), Dustin Henderson (Gaten Matarazzo), and Lucas Sinclair (Caleb McLaughlin). The members have their own The Hellfire Club shirts, which has inspired Metallica to create their own spin on the tee.

And back in the days, Stranger Things actor met the real puppet masters who pulled the strings of the guitar, Metallica themselves, last week during a rehearsal for their headline show in the Lollapalooza music festival in Chicago.

At the private meeting, Quinn jammed with the band and also presented with an original and signed B.C. Rich guitar as Joe Quinn performed during the program. About this experience, he said: “It was amazing! Opportunities to play ‘Master of Puppets’ with the most iconic metal band of all time don’t come around very often. A story for the grandkids.”

You can also buy the merch below links!

We’re having the most metal meeting ever of The Hellfire Club so we’re scouting out “lost sheep” and outsiders to join. Do you think you have what it takes? Then suit up!

What did Metallica say about Stranger Things series?

Metallica shared the statement about the Stranger Things series:

Watch the entire meeting below!