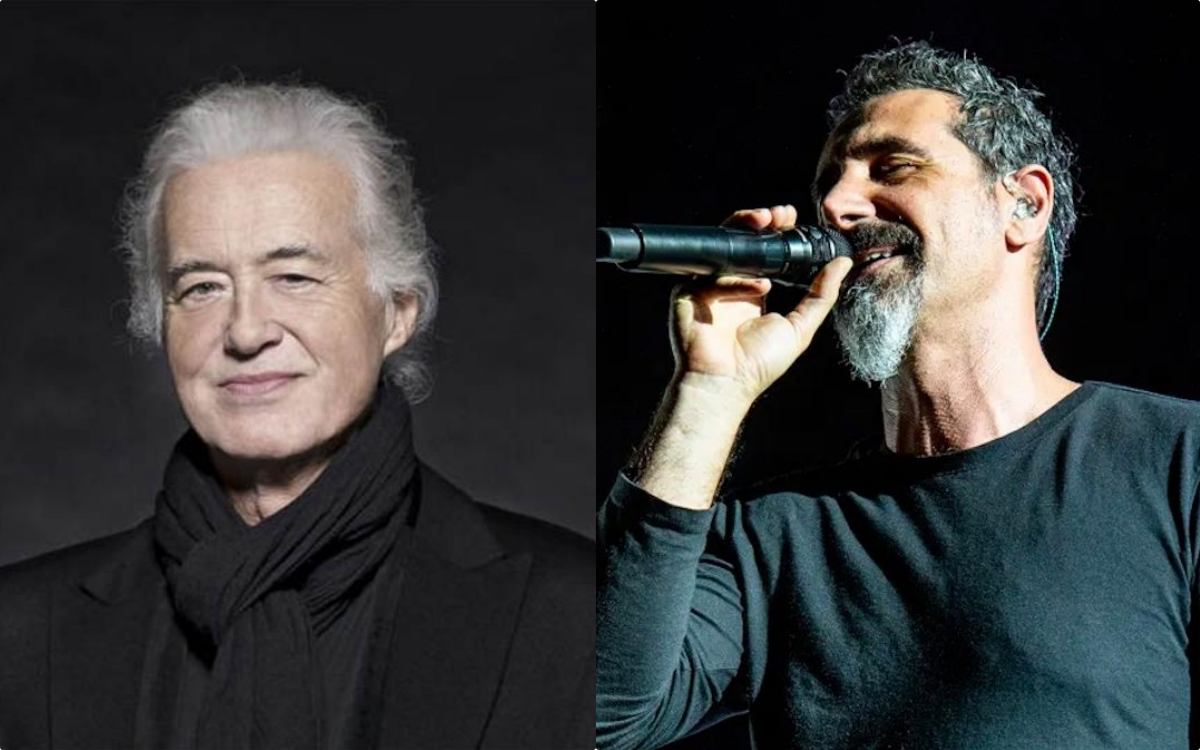 System of A Down frontman Serj Tankian called out Led Zeppelin via his social media account recently, after the lead guitarist Jimmy Page shared a post of their past tribute for Ahmet Ertegun.

Led Zeppelin members have commemorated the 14th anniversary of their concert for a charity formed by Atlantic Records founder and CEO Ahmet Ertegun via their IG account, recently. Right after the regarded band had shared their post, System of a Down frontman Serj Tankian, who is also known for his activist works, re-posted Led Zeppelin guitarist’s post, saying ‘there is no honor’ in memorializing a man who gave his philanthropic support to Turkey’s denial of the Armenian Genocide.

The frontman of System of a Down, Serj Tankian is also known for being the co-founder of a non-profit political activism organization named Axis of Justice, with Rage Against The Machine’s Tom Morello. And it’s also known that Tankian’s grandparents were survivors of the Armenian Genocide, as well. And the famous musician also talked about how he met Ahmet Ertegun, who was the son of a Turkish ambassador, in a past interview of his.

“I had a band that we had signed to my imprint, to my label, and there were a number of record companies interested in doing a distribution deal. So we met up with Universal Records, Atlantic Records at the time, and a few others in New York with the band. And after the meeting, I remember the CEO of Atlantic saying, ‘Hey, do you wanna meet the old man? He’s still here. His office is right next door.’ And I’m, like, ‘Ertegun?’ I’m, like, ‘Yeah, I’d love to.’ He signed Ray Charles and Led Zeppelin and all these bands. So I went in and sat down with him and had a nice 10-minute chat,” he said and continued,

I can’t tell you anything else, but I got an inkling that he had some defensive aspect of me being Armenian. When I said, ‘Listen, just so you know, I’m Armenian. I grew up in Los Angeles,’ and this and that, and he kind of got defensive. And it didn’t really affect me much. So I got on Google and I typed ‘Ahmet Ertegun’ and I typed ‘Genocide’ after, and I realized that he had been responsible for funding foreign policy institutes and chairs at universities who hired authors and writers that denied the Genocide. And that was an awakening for me,” told System of a Down frontman while explaining what happened during their meeting with Ertegun. Tankian also added later, recalling that they had reconnected after their first meeting and told what happened between them.

“He called me, and he said, ‘I think the Armenian Genocide should be recognized.’ And I said, ‘Okay. Great. Why don’t you write it on a letterhead and send it to me? And I won’t publicize it unless my back is against the wall with my community.’ And he said, ‘I can’t do that, because I have homes in Turkey. I don’t know what would happen to that.’ And I’m, like, ‘Then don’t do it. I wouldn’t want any violence enacted upon you or your family or anyone else.’ But it was very clear that that was an incendiary issue. And even though he was very close, he said, to the prime minister and the government officials there, he didn’t wanna take that step.”

And recently, Serj Tankian condemned Led Zeppelin by quoting their post, which was shared by Jimmy Page, commemorating the 14th anniversary of their concert for a charity formed by Atlantic Records founder and CEO Ahmet Ertegun. Tankian called out to Led Zeppelin, writing,

“Dear Mr. @jimmypage. It’s very admirable that @ledzeppelin played a tribute show in 2007 for Ahmed Ertegun as the man who signed your band to Atlantic records. What you likely don’t know is that man spent millions of dollars on think tanks and chairs at various US universities all with the goal of denying the #ArmenianGenocide. There is absolutely no honor in that I’m sure you’ll agree.”

You can see the post of System of a Down frontman Serj Tankian, down below.

Ultimately, System of A Down frontman Serj Tankian also appeared in an interview recently, revealing he is ready to release more solo rock material after his latest solo album, Elasticity. You may also find out more about Tankian’s future plans, here.