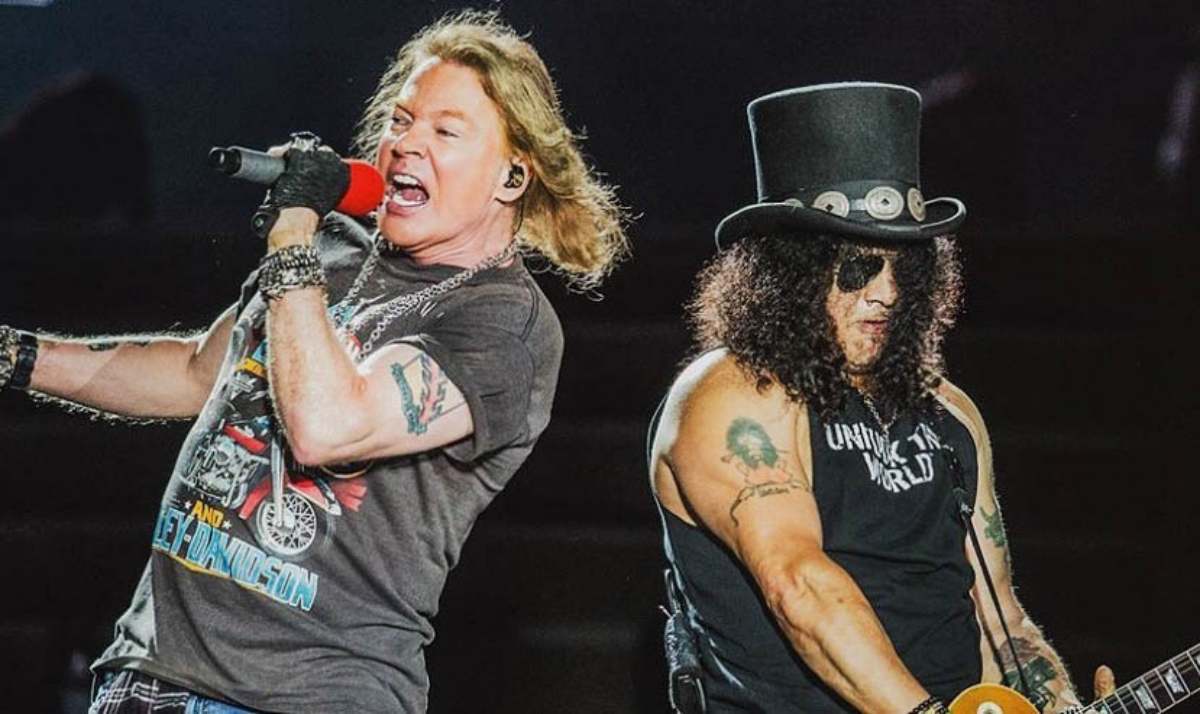 Appearing in a new interview, Guns N’ Roses guitarist Slash looked back at his musical journey starting from the very beginning. The talented musician talked about The Rolling Stones, Aerosmith along with praising his bandmate, Axl Rose.

During his recent interview, the regarded guitarist Slash talked about The Rolling Stones and Aerosmith, along with reflecting on how it is to work with someone so talented like Axl Rose and Myles Kennedy. In the meantime, Guns N’ Roses guitar god also praised his bandmate, Axl Rose, pointing at his difference from most of the other singers.

Reflecting on the working relationship between him and Axl Rose, Slash said:

“I’d worked with different singers, on and off, for a while, and then when I met Axl and we started jamming together, he was the only singer that ever brought an emotional content to it that affected me on an emotional level, on an energy level. A song all of a sudden went to a whole new level, and I felt it. And that’s when I realized where music and vocals really meet. Because prior to that, everybody that I’d worked with sucked and I had no use for it, and I would just rather play instrumentally. But that’s when I first really arrived at that poignant feeling that you get when things connect on a lyrical and the vocal level and the music level.”

The lead guitarist of Guns N’ Roses, Slash has become famous later in the 1980s. Despite his hiatus from the band for a twenty-year, Slash still made it to perform in the entire Guns albums, except for the last one, Chinese Democracy. Back in 1996, Slash had left the band until he rejoined them in 2016.

In the meantime, the regarded guitarist Slash is also a member of his own side project with Myles Kennedy & The Conspirators, outside of his tenure with Guns N’ Roses, releasing 4 studio albums so far. And after releasing the official music video for their LP’s first single, The River Is Rising, in October, Slash and Myles Kennedy, and The Conspirators have been preparing to release their upcoming album, titled 4, without stop. As the talented guitarist and his side project have been promoting their album, to be released on February 11, ‘4’ will be the 4th album featuring Slash, Myles Kennedy, Brent Fitz, Todd Kerns, and Frank Sidoris, all together. The upcoming album will also be Slash’s fifth solo album, among his other works, as well.

In one of his previous interviews recently, Slash also mentioned his relations with Axl Rose again along with their reunion tour with Guns N’ Roses. Reflecting on how he enjoyed and loved his latest tour with Guns N’ Roses, Slash explained how their tour went incredibly well, especially thanking the relationship between him and his bandmates.

“When we got back together, that whole chemistry and that thing that makes what Guns N’ Roses are for me and Axl and Duff it all just sort of came together. After that long period of time, we’d sort of forgotten what that was like,” the talented musician said and continued giving credit to their relations.

“Everybody got along great. That’s actually why the tour has kept going because initially, it was just going to be a couple of shows.”

Ultimately, the regarded guitarist of Guns N’ Roses also explained how one of his upcoming album’s songs, Fill My World, was written to fans, as well. You may find out more about what Slash explained if you are interested, here. And you can also hear the whole conversation of Guns N’ Roses guitarist down below, as he talks about The Rolling Stones, Aerosmith along with his bandmate Axl Rose, and more.