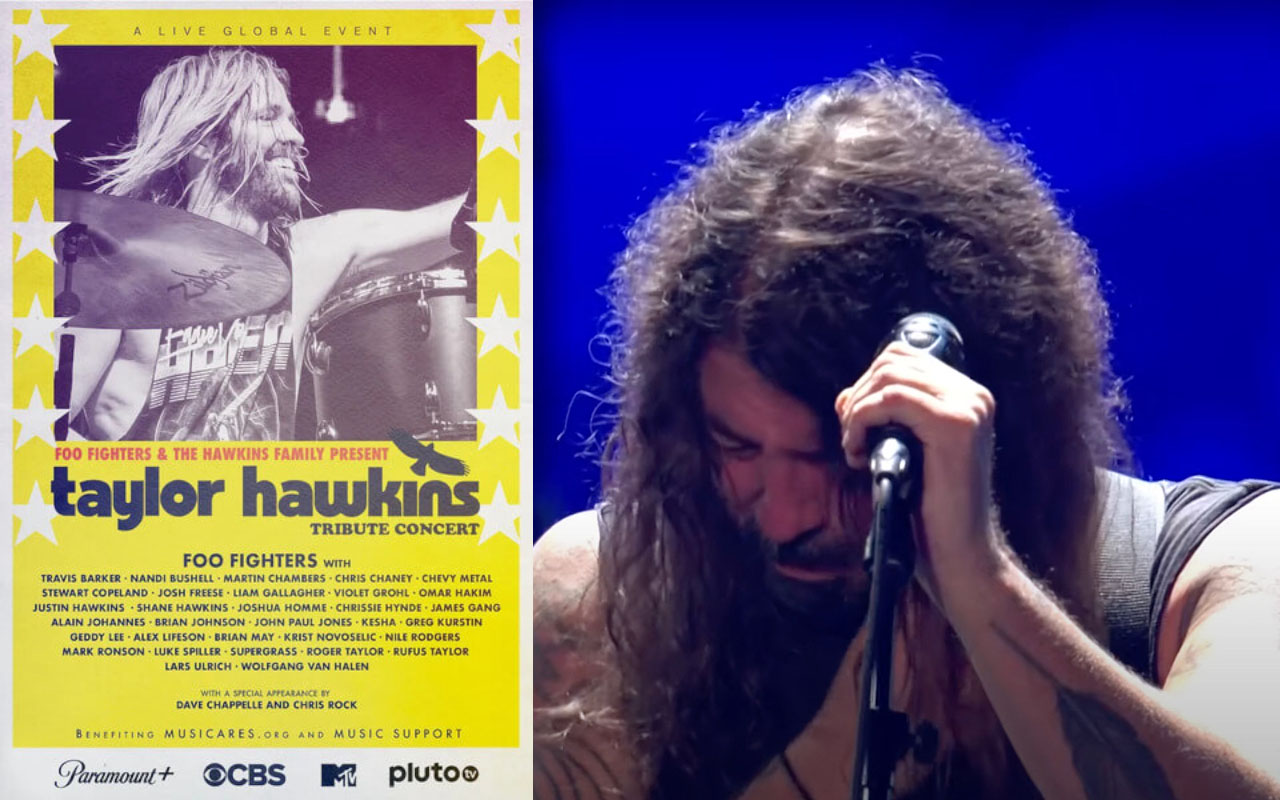 During the Taylor Hawkins tribute concert, Dave Grohl breaks down in tears when he sings. Foo Fighters played their first show since Taylor Hawkins’s sudden death in March 2022.

Yesterday, the band members concluded the massive all-star tribute to their musician’ friend, which took place on Saturday (September 3rd, 2022) in Wembley Arena, London, UK. Also, in the event artists such as Dave Chappelle, Elton John, Jason Sudeikis, Liam Gallagher, Paul McCartney, and many others, commemorate and remember the death of the band’s former drummer, who passed away unexpectedly in Colombia earlier in the year.

In the Taylor Hawkins tribute concert, Dave Grohl breaks down in tears during the Foo Fighters performance. And said:

“It’s times like these you learn to love again.” And added: “Dear friend, bandmate and brother. No-one else could make you smile or laugh or dance or sing like he could.

And for those of you that admired him from afar, I’m sure you’ve all felt the same thing. So sing and dance and laugh and cry and scream and make some noise so he can hear us right now.”

Dave Grohl also said that in the beginning:

“Ladies and gentlemen, tonight we’ve gathered here to celebrate the life, the music, and the love of our dear friend, our bandmate, our brother Taylor Hawkins,” he said in a clip uploaded to YouTube. “For those of you who knew him personally, you know that no one else could make you smile or laugh or dance or sing like he could. And for those of you that admired him from afar, I’m sure you’ve all felt the same thing.

So tonight, we’ve gathered with family and his closest friends, his musical heroes and greatest inspirations, to bring you a gigantic f—ing night for a gigantic f—ing person. So, sing. And dance. And laugh. And cry and f—ing scream and make some f—ing noise, so he can hear us right now,” he added. “‘Cause you know what? It’s going to be a long f—ing night, right? Are you ready?”

The footage from the concert captures Dave Grohl taking deep breaths and gazing around as over 100,000 fans support the Foo Fighters. Rami Jaffee’s keyboards created the scene for their song. At the end of the second verse, we see Dave Grohl crying tears.

Sales of merchandise, and ticket revenue at the two Taylor Hawkins Tribute Concerts, will be donated to Music Support and MusiCares per the Taylor Hawkins family’s wishes. Also, if you’re not in attendance, you can contribute to both websites in his memory.

How did Taylor Hawkins cause death?

He was experimenting with drugs from his early times on the road. However, in August 2001 at 29 years old, Taylor Hawkins took a fatal dose of heroin at the U.K. festival, putting him in a coma for two weeks. Grohl was beside him in the London hospital for the duration of the.

You can watch Dave Grohl in tears below!