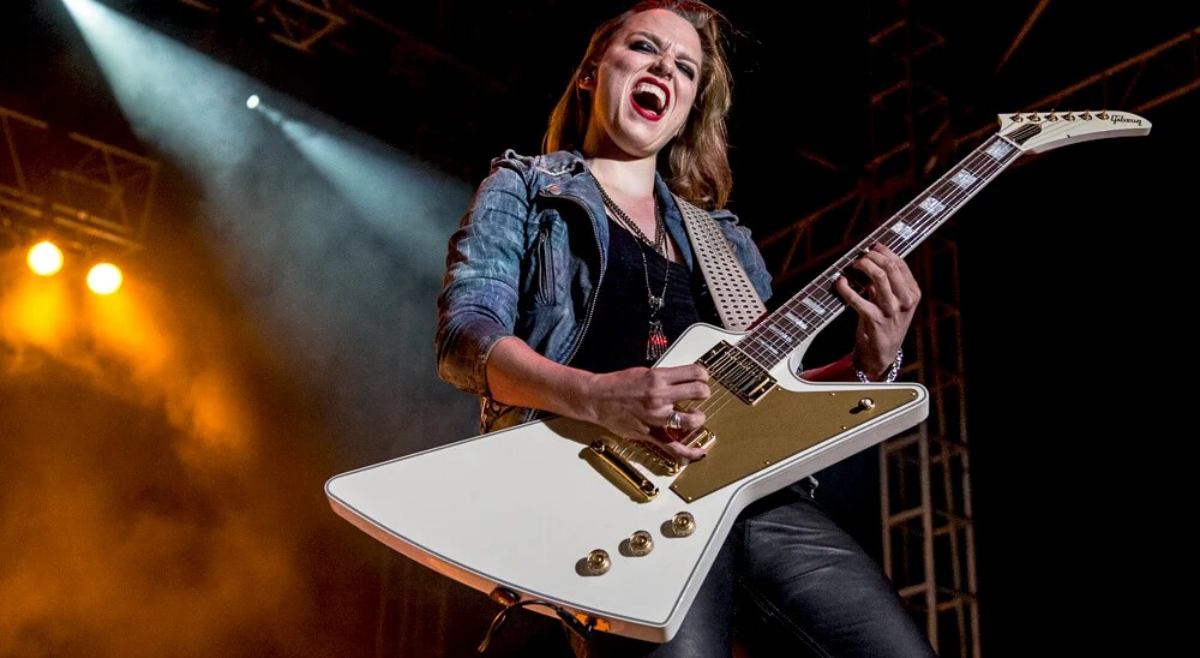 After surviving an accident with the band, the vocalist of Halestorm, Lzzy Hale showed up in a conversation, reflecting on those horrible moments and afterward of the incident.

It’s been all over the news that Halestorm‘s tour bus caught by a fire on its way to Worcester, MA to play a gig in New England city on January 20. As the incident ended up with nobody getting harmed thankfully, the band’s vocalist Lzzy Hale appeared in a conversation with Lou Brutus of HardDrive Radio, in which she explained the accident and more during their conversation.

“It happened at three a.m. Nobody was on the bus. It was a very emotional day. All-day I’m either crying or I was just laughing hysterically at it all and sometimes a combination of the two. Just because it could have gone so left in many ways. It’s kind of like we dodged a bullet,” started Lzzy Hale reflecting on.

“But, man, playing the show last night [at the DCU Center in Worcester, Massachusetts] after all of that happened was amazing. I don’t think I’ve transcended like that on stage in a long time. I think just the idea that maybe one of us would have gotten hurt, maybe somebody would have died, and the fact that we’re all in one piece and together, we literally played that show like it was our last show. And we’re just very grateful to have each other and very grateful for music, and just with everybody around us and the audience and all of that. So there’s a silver lining to it all,” said Halestorm vocalist before she continued to explain what caused the fire.

“The investigator said it was something electrical — like in the walls or something. It basically started where mine and Josh’s [Smith, Halestorm bassis] bunk would have been, which is kind of like mid-bunk hall. And it was just crazy ’cause the whole day I kept telling Arejay [Hale, Halestorm drummer, and Lzzy Hale’s brother], ’cause Arejay and I kind of notorious bunk sleepers, even when we have days off — something with hotel rooms, I have trouble sleeping. And for some reason, that day Arejay was, like, ‘I’m just gonna do something in the room ’cause I wanna work out.’ And I’m, like, ‘You know what? I’m just gonna have a bed to myself or whatever.’

And it’s just nuts because our amazing security guy ended up literally busting in with a fire extinguisher from the hotel but could not get back to the bunk hall,” she continued. “It was just… According to everybody at the fire department, it was 15-foot flames. So everything was charred. I’ve lost a lot of things, which is why I’m actually talking to you on my phone instead of my iPad right now. But we’re just lucky it’s only stuff. It’s just stuff, and we’re all together, which is great,” said Lzzy Hale showing off her appreciation for everyone is safe eventually.

In the meantime, also the guitarist of Halestorm, Joe Hottinger, contacted his fans through his social media account and shared their tour bus’s photo after the incident. He also attached an explanation of what happened as the band was woken up in the middle of the night to the sight of their tour bus in flames.

“Old Halestorm had a night for the books. We were all in our hotel rooms last night and we woke up to our bus burning down at 3 AM. Fun fun. No one was hurt.

The Worcester fire department got there and put the fire out. They were amazing. Our fearless security Steve pulled guitars and luggage out of the bay. We all lost some stuff, but it was just stuff. The investigator doesn’t know what started it, but it began in the bunk hall. What matters is that no one was hurt.

The best part is that tonight, we will rock. Looking forward to playing some music and forgetting about things being on fire. See you tonight Worcester!,” wrote down the guitarist of Halestorm, explaining what happened and the band’s current situation to the fans.

On the other hand, also Lzzy Hale tweeted to assure the fans that nobody was harmed before her conversation with Lou Brutus. She wrote down:

“Thank you to everyone for the good wishes. Like Joe said in his post, we lost some stuff, but so grateful that it was only stuff and no one was sleeping on the bus last night. I’m still shook, and my emotions are a bit high today. But looks like the universe is not done with us yet!”

Thank you to everyone for the well wishes. Like Joe said in his post,we lost some stuff, but so grateful that it was only stuff and no one was sleeping on the bus last night. I’m still shook, and emotions are a bit high today.But looks like the universe is not done with us yet!

Ultimately, Halestorm is currently on road with Evanescence to kick off their rescheduled U.S. co-headlining tour shows on January 21 in Newark, New Jersey, after Halestorm has also reportedly finished mastering its upcoming album to be released earlier in 2022. Lzzy Hale described their new album as the most difficult effort of the famous rock band earlier, as she also mentioned and talked about the musical direction of the new album of Halestorm, which is now mixed and mastered in its entirety and expected for an early 2022 release.

You can also hear out what Lzzy Hale said about the tour bus incident of Halestorm during her conversation, down below.